I put 5 miles on my sneakers on most days. Yesterday was 9 because it was so nice out. I started in a winter coat this morning, and pretty quickly tied it around my waist because it was t-shirt comfy outside. I’m down in Texas, loving the spring blossoms everywhere, but feeling pretty guilty about all this sunshine when I see my buddies up north posting pics of snowy windows, and having one more cup of coffee before grabbing their shovels. Brrrrr! I grew up in Wisconsin, and lived most of my adult life in New York, so I remember big old banks of snow all too well. So this post is for my friends in the frozen tundra. A peace offering for all my flowery posts.

There used to be a show on Public Television called Chef. Oh, it was great! Lenny Henry played Chef Gareth Blackstock. In a few episodes, Chef sets up meetings with illegal fill-in-the-blank suppliers in the woods in the British countryside. He’s always the most wonderful blend of absolute nervousness and excitement. Awesome. When those Facebook quizzes come out asking if a friend ever saw you in the back of a police car, what would it be for, my friends would tell you it would involve cheese. My husband knows that it would be the height of romance if he could arrange a questionable cheese transaction in England for me. Holiday made.

Alright, my weird sidetrack had a point. I found a raclette on Craigslist. Have you tried that before? Purchasing something on Craigslist always feels as if you are involved in some sort of nefarious act. You meet someone in a parking lot at a designated address, hand over a fistful of grubby cash, and they open their car trunk for your inspection of the goods. I look guilty as heck as I scan the parking lot, worried that a police officer might approach and accuse me of being involved in shady cheese dealings. They’d admonish, “Was the raclette worth it, Mrs. Guerrero?” And I’d respond, “I sure hope so!” 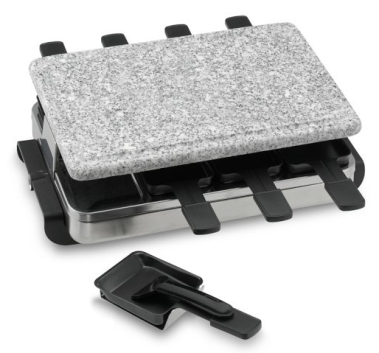 Nothing can beat a fondue pot when you just want to consume a large volume of melty cheese. Raclettes are more versatile. They really shine when it’s blustery out, but I pull ours onto the porch when it’s nice out, too.

This is the raclette I got. Swissmar KF-77081 Stelvio 8-Person Raclette with Granite Stone Grill Top, Brushed Stainless Steel

It’s supposed to be for 8 people, but definitely only big enough for 4. I cracked up when my 12 year old accused my husband of manspreading, and snagged a second one on Craigslist.

I didn’t feel like grabbing a cookbook for this. It would defeat the purpose if it were fussy. So, I worked with combinations of flavors instead. I like to group things on trays that are meant to be together. Make sure you boil the potatoes in salted water til tender first, halve, and toss in olive oil. And let the grill preheat for a full half hour.

Italiclette – Salami, prosciutto, Italian sausage, and pepperoni, with marinated asparagus, peppers, mushrooms. Fontina and Mozzerella with a swirl of pesto in the trays to pour over Italian bread. Olives. Tomatoes. Grapes.

Wisclette – Brats, potatoes, and onions with brown mustard. Cheddar and a splash of beer in the trays to dunk pretzels in. Apple slices. 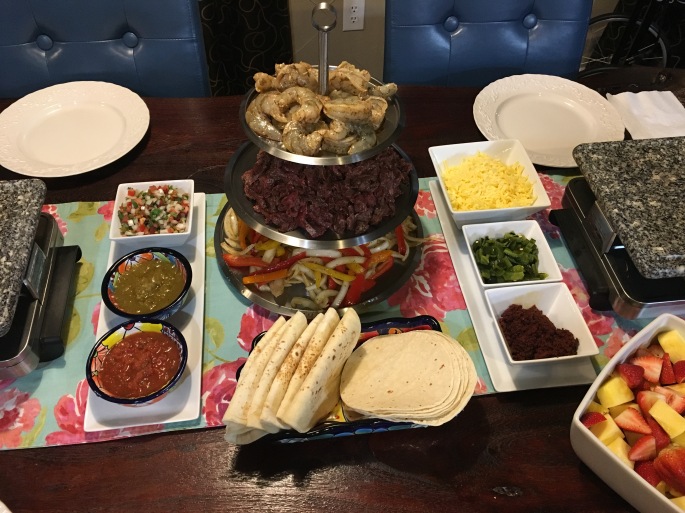 Mexiclette – Shrimp, steak, peppers and onions in a fajita marinade. You can help the peppers and onions along by sauteeing them for 5 minutes before moving them to the serving trays. For the cheese trays, I put out cooked chorizo, roasted poblano peppers, and shredded quesadilla cheese or Monterey jack, with corn and flour tortillas to warm and scoop that melty goodness into. I leave bowls of pico (equal amounts of tomato, yellow onion, and cilantro with a minced jalapeno), red salsa ( I love Texas Texas restaurant style) and tomatillo salsa (love Joe T. Garcia’s) on the side. Pineapples, mangoes, and strawberries. 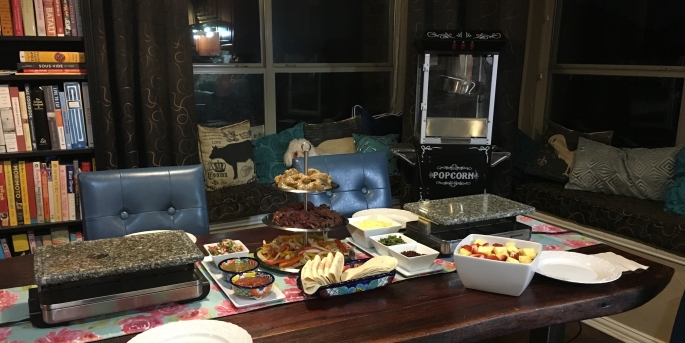 What do you do with your raclette? I’d love to hear!

13 thoughts on “Jen’s raclettes. Cheesy, melty, oozy deliciousness, and the most relaxing party you can host. Yeah.”

This is a text widget. The Text Widget allows you to add text or HTML to your sidebar. You can use a text widget to display text, links, images, HTML, or a combination of these. Edit them in the Widget section of the Customizer.
Follow Jennifer Guerrero on WordPress.com